It’s been over a month that we haven’t updated our blog. It doesn’t mean that we didn’t have any interesting works to do though. Instead, we were rather obsessed by the activities we were doing.
In response to the flood, LPN relief operation can be categorised into four main areas of activities.
Emergency Relief and Rescue 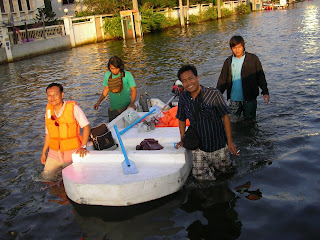 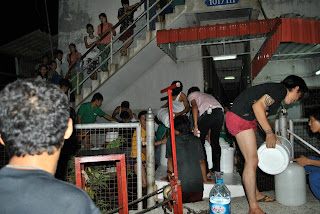 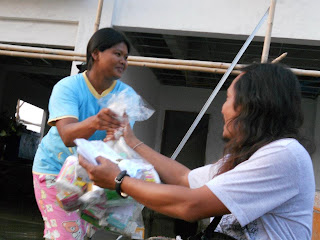 Bangkuwat
The very first priority during November was to do emergency relief operations for flood victims in particularly remote areas where other relief operations might have difficulty to have an access; for example, Lamlukka district and Bangkuwat district of Prathumthani Province, Bangkhuntien district of Bangkok, and as well as Buddhamonthon Sai 5 of Nakorn Prathom Province. After conducting the survey on the numbers of victims in each area and examine their needs, it showed that most of the victims lack an access to clean water. Therefore, we brought them clean water which is produced by our water purification plant.

Food donation
While in Ratchaburi province, our local-based team acted as a hotline coordinator to provide assistance to migrants who wished to evacuate from affected flooding areas. Further to that, the team helped outsource food supply for migrants living at the evacuation centre provided by the Ministry of Labour.
Prevention 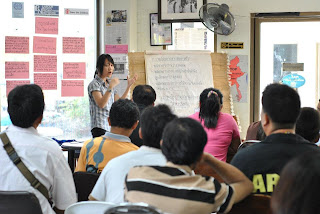 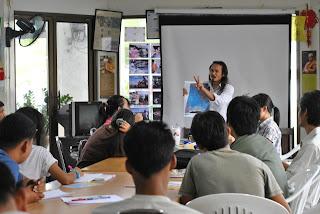 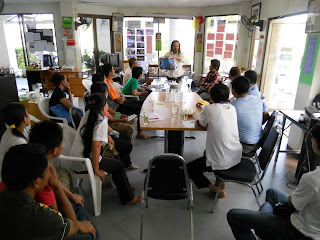 Mr. Sompong Srakaew, director, invited the two groups of volunteers to train on how to work as watchdogs in response to possible flood in Samut Sakhon. There were many migrants who volunteered themselves to safeguard their communities. On the first training, we were honoured by the staff from Save the Children UK who came to train our first group volunteers and LPN staff on the issue of Child Protection in Evacuation Centres. 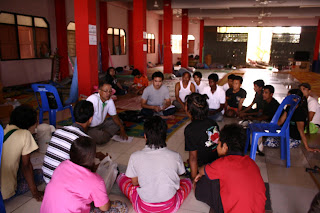 At Wat Klong Maduer in Samut Sakhon, we received and assisted factory workers to claim their wage from employers as it happened that many workers had to leave flooded factories before the next cycle of their wage payment turned.
Fundraising 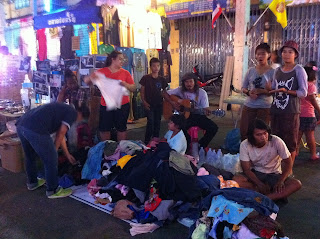 Fundraising programme
We went on fundraising programme selling second-hand clothes at a flea market in Ratchaburi Province, aiming to raise money to buy anti-fungal cream against Hong Kong foot for flood victims.  This activity wasn’t so successful. Nonetheless, we could meet a lot of people who had to move shortly from flood areas to stay in Ratchaburi, and had a chance to listen to their shared experiences.
Yet, December’s activities are still actively going on like always. Soon enough we are going to update our activities again. See you next time, readers. Good luck!
Posted by LPNFoundation at 03:40 No comments:

Hand to Hand: Safe and Clean Water for Flood Victims 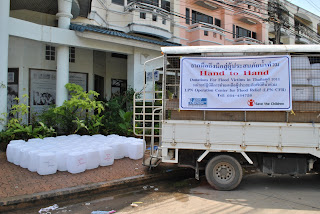 Safety First: The Preparation for the Flood in Mahachai 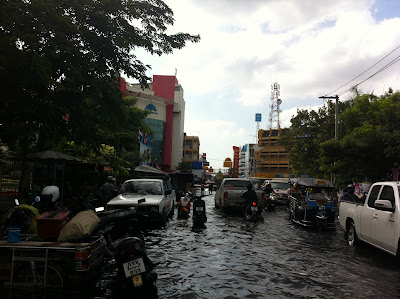 
The flooding situation in the critical areas like Ayutthaya, Nakornsawan, Pathumthani provinces is slowly getting better. Samut Sakhon is the final channel which all water mass from northern provinces will pass by before running to the sea. However, many people here seem not to be aware of the flood. When you walk to the inner city of Mahachai, asking people about how they prepare about the flood, they would probably laughed at your question.
Mahachai is closed to the sea; flooding is, in fact, quite a usual phenomenon here. When the sea tide rises,  the low area like Mahachai market is slightly flooded in the morning, and then the water will go back to the sea in the afternoon. Therefore, many people in Mahachai perceive that the flood caused by the water mass coming from the north to Mahachai would be more or less like the sea rising period, and subsequently, they do not prepare much for the flood. 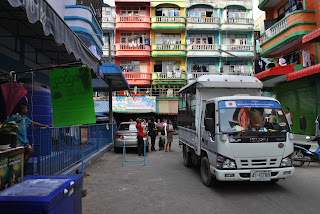 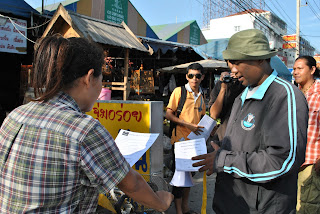 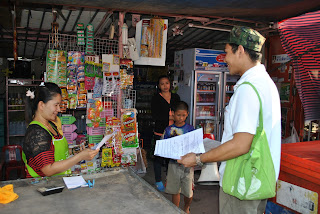 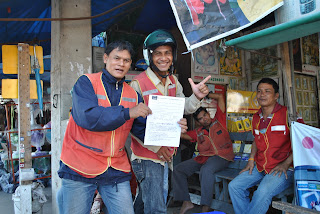 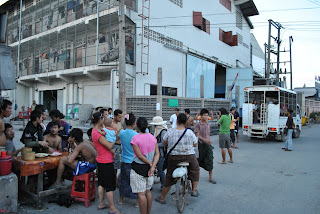 
LPN is aware of severity of the flood in Mahachai, and at the same time, we are aware of some unfortunate groups of people who may rarely have an access to the Thai news. We, therefore, work together with Raks Thai Foundation in public announcement and dissemination, hoping that residents both Thai and migrant workers in Mahachai know and understand about the flooding situation, and be well-prepared for the flood and evacuation. Since last few days, our mobile car have been going to communities; for instance, Bang Pla, Po Jae, Moo Si, Golden etc. to inform local people about the flood and what to do during the flooding. We announce, hand over the leaflet giving the instructions in three languages: Thai, Burmese, and Mon, and talk to people about the preparation. At the same time, we try to build up the key network in each area so that these people could help inform us about the situation in each community.
Soon enough, water will reach the inner city of Mahachai. Until then, we hope that more people will be ready for the flood, and less people will be affected by this flood.
Posted by LPNFoundation at 20:11 No comments: 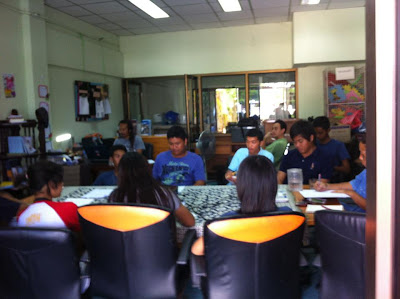 Debriefing on Volunteers' fundraising work
We had officially completed our Aud + Dee camping since 24 October 2011. On the last day, we had a debriefing with the young volunteers regarding their fundraising for flood victims. In the final conclusion, approximately, 1,200 people received help from the Aud  + Dee fundraising project. 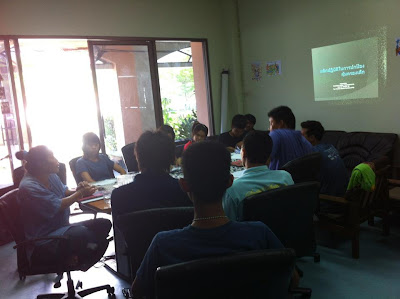 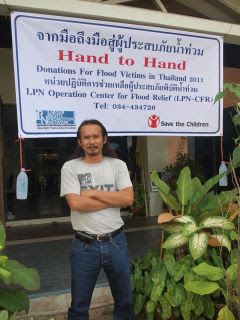 In the final part of the meeting, we have informed the volunteers about our ongoing mission for flood victims, the "Hand to Hand" project, which is supported by the Save the Children UK in Thailand. We name our project like this because we would like to guarantee that every penny we spend from donations will go directly to the victims' hands. And now, it is our delight to see that these volunteers are enthusiastic to help us in the new programme. Yet, we have staff, but we still need more donations both in goods and finance to keep our flood relief programme run. And these days, we make it easier for donors who would like to make a donation through credit card. It is now possible to send your donation to our LPN Foundation online. If you wish to make a donation, please see the PayPal link on your right-hand side and follow its instructions. 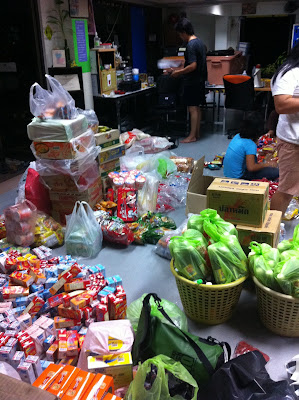 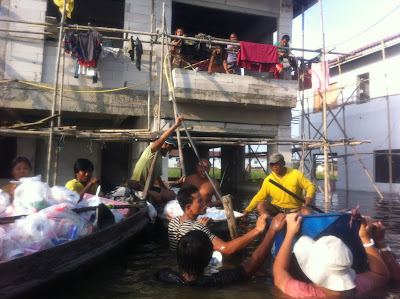 Hand over relief bags to flood victims, mostly builders, at the Supalai Ville village,
where it was one of a hard-to-reach area
Again, we assure you that your donations will go directly to the hands of those who are affected by the flood. Thank you in advance for your kind support.
Posted by LPNFoundation at 12:23 No comments: 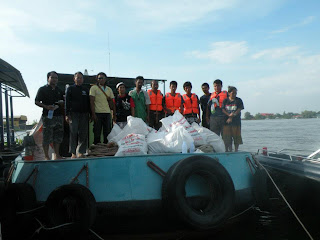 The LPN team, and the crews from Department of Fisheries 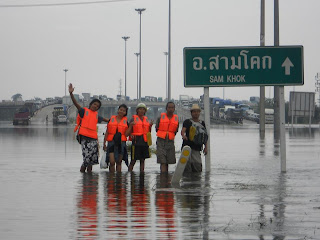 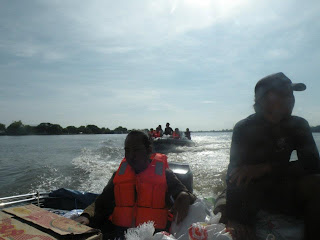 Journey to affected people in Samkok
Following the fundraising activity conducted by the young campers, we could raise some fund to buy basic needs such as food, drink, medicine etc to distribute to flood victims living in the areas of Pathumthani, and Nontaburi province. After a week of emergency relief work, we found that the main obstacle for our effort is to work out with logistics. Sam Khok area in Pathumthani province can be a good example. Our goal was to distribute emergency relief bags at that remote and disastrously affected area. Even big trucks cannot bring us there! However, distance, water current and heat could not discourage our team which is comprised of LPN staff, and young volunteers to go to Sam Khok. All team members had carried cumblesome relief bags on their shoulders and walked over 10 kilometres until they met a motor boat from Department of Fisheries. With the help from this boat, they could finally distribute relief bags to affected people.

This can be just one example which we could successfully work to achieve our goal. Although the total number of affected people in Thailand are unknown, but assumably, it must be very high. We know that it is a big dream to help all flood victims, but we will do our best to respond to their basic needs!
Posted by LPNFoundation at 06:42 No comments: 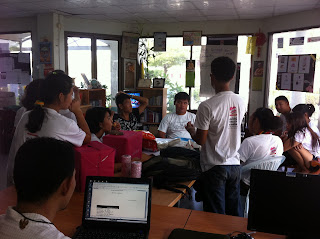 Meeting before the open-box rally started
13 October 2011
Currently, a group of young people gathering to run an activity created and administered by themselves at the LPN. Initially, their programme has been launched since last Saturday, 9th October when they had the first meeting discussing the ideas of what to do in Mahachai area, where there are a lot of Burmese migrants living and working. Apart from this original idea, these young activists have concern about the current flooding problem in Thailand, which caused many people death and homeless. Therefore, they decided to deliver their concern to Thai and migrant communities in Mahachai, and opened the box and rallied over communities for donations. It was quite a big success after all as the financial donation from Thais and Burmese migrants in Mahachai has reached roughly 19,000 Baht in 1 day (12 October 2011).

The theme of the activity: Aud + Dee (Literally, it means Show off+ Good. By their definition; however, it means they would like to show their goodness to the society even though they are still young)
The concepts of activity: T-Shirt, Goodwill, No Border

On this upcoming weekend, 15-16 October 2011, these worker group will organise a gathering event with children at Luang Pat Koson Uppatham School. Besides camping event, they will open a booth sellingT-Shirts. The profit raised from sold products will be donated to help flood victims all over Thailand.
Posted by LPNFoundation at 21:55 No comments:

LPNFoundation
Mahachai, Thailand
Labour Rigths Promotion Network Foundation (LPN) is an organisation that aims to promote quality of life for workers. This includes rights-protection, equality promotion, self-reliance, and peaceful living together in society.